Claridge Court scored well above industry benchmarks in its 2014 Holleran employee satisfaction survey. Claridge Court ranked in the top 4 percent of the 309 senior living communities surveyed in 36 U.S. states, with 45 of 57 factors scoring in the 90th percentile nationwide.

“We’re incredibly proud of our team here,” said Robert Salierno, executive director of Claridge Court. “The results of this survey show that our team members are engaged and passionate, and their efforts make working and living here such a rewarding experience.

Out of the 142 staff members at Claridge Court, 130 completed the survey in October 2013. That 91.5 percent is well above the Holleran average of 78.3 percent. The survey measured areas including work climate, communication, teamwork, training, employee expectations, opportunities for advancement and overall satisfaction. Claridge Court scored “significantly above” the Holleran benchmark in 53 of the 57 factors assessing the different areas.

Claridge Court also received Holleran’s “Highest Honors” based off the survey results. To be considered for Highest Honors, a community has to achieve “overall satisfaction” in the 70th percentile or higher, score significantly above the Holleran benchmark in 44 factors, rank in the 90th percentile of all senior living communities nationwide, and also have a response rate of at least 70 percent.

Holleran is a national consulting and research company that has specialized in senior living for more than 20 years. The organization conducts various surveys throughout the year, mostly on trending topics across the senior living field.

Claridge Court was also awarded a five-star rating from U.S. News & World Report, in their annual list of Best Nursing Homes for 2014. The rating was based on scores in health inspections, nurse staffing and quality measures. 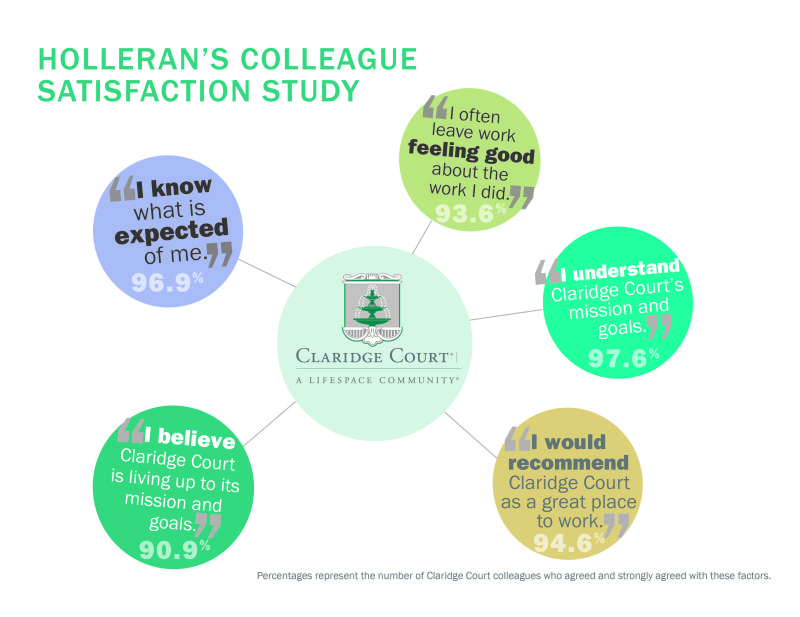